The wetlands are critical environmental features as they filter storm water and slow its flow prior to entering the sea and Lake Macquarie. Many of the wetlands are also listed under national and international treaties, recognising their role as habitat for migratory birds.
Key activities include:

BWSP is home to several endangered ecological communities, that is, groups of plant species that are not found in many other areas. There are a number of vegetation communities across the BWSP, however there are three dominant communities:

THREATS TO THE ENVIRONMENT 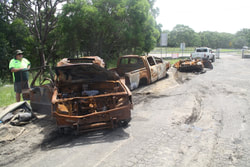 Illegal dumping
Illegal dumping can cause significant negative environmental and social impacts. Not only does dumping affect the visual appeal of the park and the local bushland, it can degrade land, encourage erosion, damage animal habitats and encourage illegal dumping by other people.  Most importantly the illegal dumping of hazardous wastes and building materials particularly asbestos is a health risk to persons visiting the park for recreational activities.

Illegal dumping is a crime, if you see an act of illegal dumping we encourage you to report the incident to the EPA Environment  Line on 131 555, Crime Stoppers on 1800 333 000 or NSW Police.

Exotic Species
Pest animals are also a threat to native wildlife in BWSP with introduced species such as mice, rats, foxes and cats known to be in the area. Native fauna are vulnerable to direct attacks by uncontrolled domestic pets and face the threat of being out-competed by feral animals for food and habitat.

Feral cats and foxes pose a significant threat to the survival of many native species including small mammals, birds and reptiles. Rabbits directly compete with native wildlife for habitat. Additionally they impact on native plants by browsing on seedlings which prevents regeneration and loss of vegetation cover, which in turn can result soil erosion.

Reckless Driving in Sand Dunes
Responsible 4WD driving along designated entry track and beach front is allowed by drivers with a BWSP 4WD permit. However driving in undesignated areas and over native vegetation has become an environmental issue. Many areas in the hind dunes are areas which volunteers have been working to rehabilitate. 4WD driving can cause erosion, smother seeds and spores vital for habitat regeneration and kills vegetation. This also affects the wildlife in BWSP as many bird and reptile species use dune vegetation as habitat.
Belmont Wetlands State Park  2020